skip to main | skip to sidebar

Perry, one of the earliest people to start this swap, is a SCCA champion autocrosser. After finding a cracked block, he was forced to rebuild his engine, setting him back. The engine is currently built and on the stand.

Perry's motor is a great example of how to build a 5.0 on a budget. By using GT40P heads and headers, and a F303 cam, this engine will be putting down strong, reliable power using dirt-cheap factory parts. The GT40P heads and headers come stock on '97-99 Ford Explorers, and the F303 cam is a tried and true bumpstick. Perry has built his engine to produce boatloads of torque, something that he can really use on the racetrack. With a combo like this, who needs to drop $5,000 on an LS1, or $10,000 on a supercharged/turbo'd M3 motor?

Perry should be able to recover most or all of his engine cost when he sells his built BMW M50 motor. Here is one time when the high cost of BMW parts actually works in your favor!

The sickest part about this whole thing is that the engine is going to be dropped in Perry's stripped-down race car that only weighs about 2400 lbs (with drivetrain). This thing is going to have the power to weight ratio of a Monster Miata or a Shelby Cobra replica, but has the benefit of a stiff chassis, great weight distribution, huge brakes, and huge tires, at a fraction of the cost.

Here's the specs on his build and a teaser shot:

Swap brought to you by:


Stay tuned as we post more updates from this awesome build!
Posted by Matt at 6:05 AM No comments: 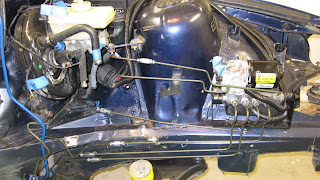 We sell engine mounts, conversion manuals, and transmission mounts to swap in the ultimate in budget power - the Ford 5.0.

Instead of high-priced kits, we sell the bare bones stuff you need to do this swap. Everything else you need you can get from the parts store, a speed shop, or a local shop.